A confused and insecure start to what had already promised to be a tricky year was momentarily despatched last week as the god’s of good stuff gave us brief respite;

Firstly, at Heavenly, Doves delivered a masterpiece of a fourth album. It is genuinely a killer. We had a collective ‘holy shit’ moment followed by a constant stream of visitors to our office as the word spread. That story – if it is of interest – will roll out from the Heavenly website. Long may it run. 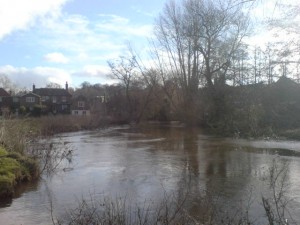 On Sunday (17th) Jak and I went down to Godalming for a spot of perch fishing on the river Wey. A lovely afternoon and the walk made for good exercise but far too much water pushing through for there to be a chance of finding fish. We didn’t feel quite so bad about that when this arrived from Chris Yates in reply to an e mail asking if his weekends fishing had been more successful than the performance of his beloved Southampton FC;

“The river was coloured after a night of rain and the perch refused to play. The football pitch was also coloured – green…and the team refused to play…until extra time!! Having scored on 92 mins they sent a near equaliser past the post on 93. O gloom. Yet somehow my gang and I had a great afternoon.
Now…title… River at the End of Autumn.”

Cheers to Obama…and you, of course,
Chris.

(The inauguration of Barack Obama helped ease my fears somewhat as I’ve been watching the mighty ‘Generation Kill’ further expose the dreadful mess that was the ‘liberation’ of Iraq. Please Mr United States of America, don’t ever let that happen again.)

The title Chris was referring too is for his contribution to our book, ‘Caught By The River; A Collection of Words on Water’. Chris has written a beautiful piece about the Upper Dorset Stour which joins a now complete set of words and illustrations that are about to hit the printer. The release date of June 16th (naturally) has been met and further information will start rolling out on the site from next week. Needless to say, we are very excited, an emotion that was raised even higher on receiving these kind words from Robert Macfarlane, who dropped us a line after seeing the rough;

“It’s absolutely STUNNING. What a look you’ve found and made; the perfect visual vernacular for this. Woodcuts and cream (could be an icecream flavour, that; I’d buy), but not hokey or reactionary. Just…beautiful and weighty. The maps…the inset images…the page borders. Especially the maps. You’ve made such a thing. As for the content…well, I haven’t read it all, but everywhere I’ve dipped is high-quality. The first essay is audaciously good. “They stood out as surely as if they were carrying crosses to some holy place – blackened men with gin gums and swollen paws for hands”. Ah! awesome. Can’t wait to see and heft the finished thing. Huge admiration to all involved.”

words of praise indeed and rightly pointing out the quality of John Richardson’s ‘maps’ and John Andrews’ words.

The week ended with lunch in the French in the company of Brian Case and James Oldham. Two wise men in the house of bohemia. Conversation was broad but appropriate and took in the films of Sam Fuller, the books of Richard Price (who’s ‘Lush Life’ was declared book of the year) and the music of Albert Ayler. I listened and I learned and I laughed when Brian, whilst talking about a favourite Fuller western, used the magical phrase “caught by the red Indians”. That, is exactly how I had felt at the start of the week, but then along came some music and some mates and some kind, kind words of encouragement and suddenly everything was gonna be ok.

Now, how are the rivers looking, I got a day off tomorrow…..