“Relax!” calls Mike from the stern. That’s easy for him to say! The boat rolls back to port. “It’s just Milly moving about. Sit down, Mills! Good girl!”

I can’t see what’s going on behind me, but the rolling gradually subsides. I loosen my grip on the gunwales, then look about for my paddle.

What am I doing here? Only Mike could have coaxed me into a canoe. I don’t do canoes. I’m a dreadful swimmer, so make a point of avoiding going out of my depth in tiny, unsteady boats. But this expedition was agreed weeks ago. Mike played his trump card: “We could take a trip to Wild Cat Island,” he said.

I’ve wanted to visit Wild Cat Island ever since I first read Arthur Ransome‘s Swallows and Amazons three and a half decades ago. The tale of a perfect summer holiday in August 1929, in which the four Walker children, John, Susan, Titty and Roger, are deemed, via paternal telegram, not to be duffers, so are allowed to sail their boat, Swallow, out on to an unnamed lake and make camp on a small, wooded island. Here, they encounter pirates in the form of the Blackett sisters, Nancy and Peggy, captain and mate of the Amazon. Alliances are forged, wars are declared, planks are walked, and buried treasure is recovered. It’s a children’s classic. If you haven’t read it, you’ve missed out.

Mike read Swallows and Amazons at the same time as me. It was on our reading list at school. Unlike me, though, Mike didn’t go on to borrow as many of the eleven sequels as he could from the local library—although he does remember reading Great Northern. I never got to read the full set, but the volumes I did manage to lay my hands on left a lasting impression. So of course I couldn’t say no to a trip to Wild Cat Island—as Mike well knew. Since we first met, age eleven, Mike has been my adventurous guardian imp, perched on my right shoulder, tempting me occasionally to get a life. If Mike hadn’t coaxed, cajoled, and occasionally conned me over the years, I wouldn’t have climbed a fraction of the hills I’ve climbed, nor, when we were a lot younger, visited quite so many railway stations and locomotive sheds.

The bow of the canoe is ridiculously cramped. A large, purple flotation device takes up most of what little leg-room there is. I try drawing my knees up in front of me, but this forces me to lean back, which will make paddling awkward to say the least. I try assuming an inelegant, lotus-like position, but this is even more uncomfortable. So I end up crossing my ankles beneath my seat, wedging my right knee under the starboard gunwale, and resting my left knee on top of the port gunwale. I reckon I’ll last about five minutes before cramp sets in.

We push off from the jetty, back-paddle a short distance, then slowly bring the boat about. The wooded dome of Wild Cat Island swings into view. Peel Island, the natives call it. Early autumn has begun to colour the trees. They grow so densely that they conceal the terrain underneath, making the island seem almost afloat.

The Ransome family used to take holidays here, at the southern end of Coniston, when Arthur was a child. He, his brother and sisters would hurry down to the lake as soon as they arrived, dip their hands into the water, and make wishes. The highlight of one summer holiday was a rowing-boat trip to Peel Island. Their father, Cyril Ransome, took them back to the island in the summer of 1896 to meet with his old college friend the archaeologist William Gershom Collingwood. Collingwood, who was also John Ruskin’s secretary, had previously excavated on the island, uncovering a small, early-medieval fortified settlement. He had gone on to write a children’s story, Thorstein of the Mere, about a young Viking who hides from his pursuers on the island. The Ransome children loved the book. In later life, Arthur was to become Collingwood’s close friend and protégé.

We begin to paddle towards the island, which is only about a third of a mile away. I’ve never paddled a canoe before, but seem to remember reading somewhere that it’s best to keep the paddle as vertical—and, therefore, as close to the canoe—as possible. After ten or twenty strokes, having crushed my left thumb against the port gunwale five or ten times, I work out that it might be a good idea to hold the paddle a little higher up the shaft, and settle into a more regular, less painful rhythm. I’ve also read somewhere that good paddlers don’t splash. Actually, come to think of it, it was probably oarsmen not paddlers—and it was almost certainly in Swallows and Amazons that I read it. So I concentrate on not splashing, which involves paying close attention to my paddle, rather than watching where I’m going. When I finally think to look up, I’m astonished to find how close we already are to the island. I call back to Mike for a photo break, and we bring the canoe to a halt. I then faff around, extracting my camera from the water-tight lunchbox that had seemed like a good idea at the time, and fire off a couple of shots. Then it’s back to the paddling. We pass close to the eastern shore of the island. Branches hang low above the water, almost within reach. “In the book, there’s a landing place around here,” I call back to Mike. There is, indeed, a landing place of sorts, but it’s a lot smaller than the one in the book. But we have no intention of landing here: anyone who’s read Swallows and Amazons knows there should be a far better landing place at the southern end of the island.

We drift past a low, rocky promontory and some rocks. This is so right: it’s just like in the book! We’re almost past it before I see it: back to our right—I mean starboard—a steep-sided, narrow channel leads straight into the heart of the island. A few feet to either side of here, and the channel would be invisible, obscured by rocks and headland. This is the place! We’ve found the secret harbour!

We turn hard to starboard, paddle down the channel, and glide into the landing place at the far end. I step ashore, my cramped legs nearly giving way, then take the free end of the rope fastened to the bow and look for somewhere to tie it. It suddenly dawns on me: I’m on Wild Cat Island! It’s taken me thirty-five years or so, but I finally made it! And I don’t mean ‘rope’, I mean ‘painter’. And I’m going to tie it to that tree root with a bowline knot, because bowline knots are the best for tying painters—because Arthur Ransome says so! The canoe magnificently secured with a fine bowline, I climb the promontory forming the western wall of the secret harbour to take in the view. It’s exactly as I’d imagined; exactly as Arthur Ransome described. Who would have thought it: the place actually exists! I take photos, then Mike and Milly the labradoodle join me, and we take more photos. Mike has been here before. He made a dry-run a couple of weeks ago, but has had the decency not to rub it in. We head inland, into the trees. To our left, across the lake, the Old Man of Coniston—or Kanchenjunga, in Swallows and Amazons parlance—is wreathed in mist. We’ve been lucky with the weather, but heavy rain is forecast later. We reach the bottom of a small ridge and clamber up tree roots. Through the trees, we can now see all the way up the lake towards the Unexplored Arctic and the North Pole, as the Swallows marked them on their map. It was near here that the Swallows hoisted a lantern into a lone pine tree to act as a lighthouse. I search in vain for the tree, but it’s 84 years since the Swallows were first here, so no joy. Then, turning right, Mike and I come to a large clearing in the trees near the small landing place on the eastern shore of the island. This must surely be the Swallows’ and Amazons’ campsite, right where it should be! It’s also the site where W.G. Collingwood excavated his early-medieval settlement. And then I see the red sign nailed to a moss-covered tree at the edge of the clearing:

Please be a responsible visitor to this site by observing the following,

NO CAMPING
NO FIRES

This is a Site of Special Scientific Interest (SSSI), owned and managed by the National Trust. It is a particularly rare habitat, supporting a diverse range of plants and animals. These species rely on large quantities of dead wood being left lying on the woodland floor. Continued burning of dead wood and felling of trees by irresponsible campers is causing extreme damage… [etc.]

I feel affronted on behalf of the Swallows and Amazons: irresponsible campers, indeed! But those were happier, quieter times. If everyone who visited Wild Cat Island lit a fire, there would be nothing much left worth visiting. Still, it’s a shame: the sign has dampened the magic of the place. That’s interfering natives for you! We head towards the south end of the island, to the rocky promontory we rounded earlier. From here, we can see down the lake towards the Antarctic. There’s another canoe out on the lake. Natives or pirates? It’s impossible to tell from this distance. But they seem to be giving the island a wide berth.

We take a few more pictures, then have a brew and a bite to eat. To avoid antagonising the natives, we abide by their strange laws, lighting no fires, making do with a flask of tea and a sandwich—enough to put us on. Then it’s time to leave. We head back to the canoe. My bowline has held well. We cast off and back-paddle out of the secret harbour.

I’ll gloss over the next few hours. We get there eventually. Then, after a quick coffee and a Bramwell tart, it’s three more nautical miles back down the lake, into the wind and approaching rain. 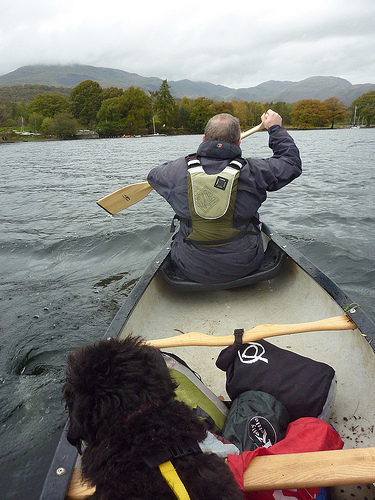 Heading off for a quick coffee.
Photo © Mike Dagley