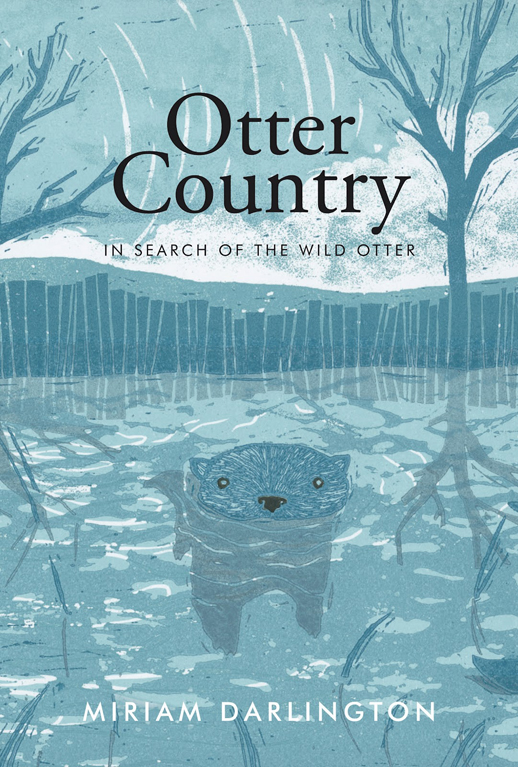 Otter Country: In Search of the Wild Otter by Miriam Darlington
Review by Chloe Evans.

Obsessed by otters from childhood, a chance sighting in a Scottish loch one summer reawakens the interest of poet Miriam Darlington and triggers the journey related in Otter Country, in which she travels around Britain from her home near the Dart estuary, trying to see more and know more of this elusive mammal. Her childhood mania originally took the form of a self-published campaigning leaflet ‘Otter News’, which circulated amongst friends and family. I imagine that child would have been delighted to know that her early words would kindle this beautiful book, illustrated with pen and ink drawings by Kelly Dyson and blue-green, watery end-papers. Some reviews have called it a brave book, and indeed it cannot escape being read in the context of the British otter canon – Henry Williamson’s Tarka the Otter and Ring of Bright Water by Gavin Maxwell. The legacy of these classics is implicit in a visit made early in the journey to ‘Camusfeàrna’ and Jimmy Watt, one of the otter-keepers employed by Maxwell. But it is soon apparent that there is a widening gulf between the landscapes otters now inhabit and those familiar from these accounts. As the search widens to Wales and most parts of England, otter people, statistics and habitats are documented, along with the depressingly multiple threats to their populations, which have little now to do with hunting with hounds.

So unlike Tarka this becomes a very human book, full of roads, litter and agricultural practices, but with an aching absence at heart where otters ought to be. The vacancy is filled by sightings of other mammals and birds; and the common becomes uncommon as these come into focus for Darlington, her way of describing the hyperacuity of the senses that develops when observing nature. Sleeping out by a likely otter spot and being woken by an owl beak to nose is rendered immediate and vivid. Skinny dippers, rare liverworts, edgeland rivulets in supermarket carparks and the opportune discovery of some discarded waterproof trousers while out in a gale all get equal good-humoured consideration.

The dense, poetic language is a delight- there are nervy hedges and grassy, whispering water whose flow syrups into a pool. Still, there aren’t many otters in the narrative; it seems they don’t give much away and more than the animal itself, its aromatic spraint takes centre stage in the drama of otter tracking. Otter poo it seems smells exotically of lavender or jasmine tea, and from it we learn about diet, habits and family groups; gathering knowledge alongside the author as her search continues.

An admirable amount of patience and a love of time spent by the water pay off though, and when the otters emerge they are captivating. Fleeting glimpses of single otters and family groups feeding and swimming are beautifully described, though they appear so rarely that they seem almost mythical. So the search for the wild otter yields eventually, but the protracted water-wandering that it required is a large part of the appeal of this book. Any lover of rivers will find much to enjoy here as an account of the varied waterways of Britain; how they are threatened, how they might recover, what plants and creatures they house, as well as the otters secreted somewhere along their banks.

Otter Country is on sale in the Caught by the River shop, priced £15.